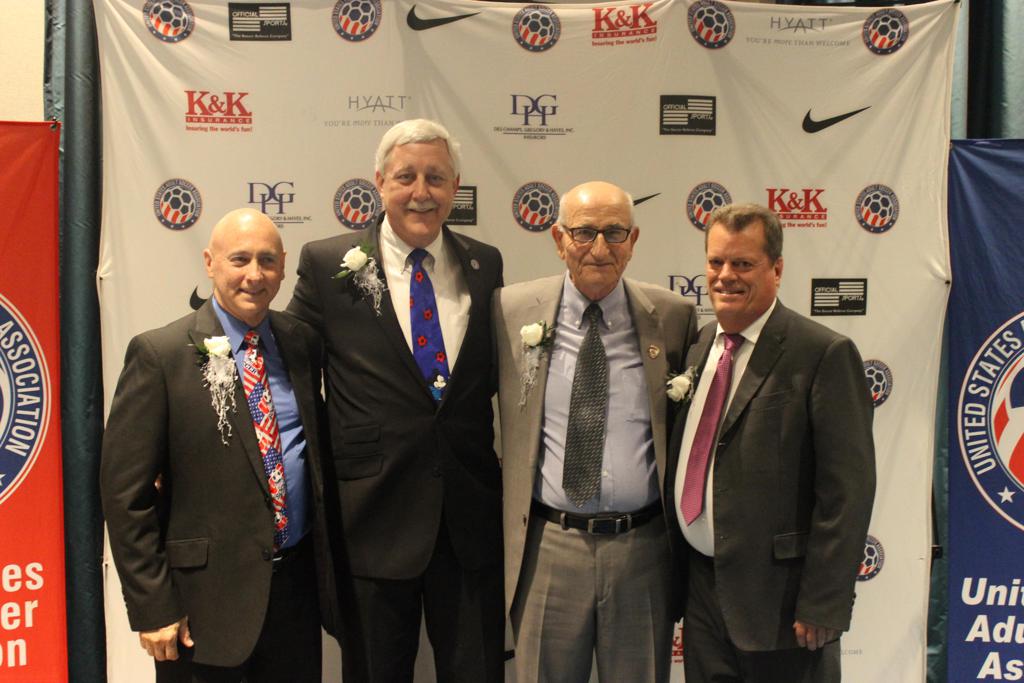 US Adult Soccer is happy to announce our 2016 Hall of Fame class. We'd like to thank each of the inductees for their time and effort to advance adult soccer. This year's ceremony will take place October 1 in Orlando, FL.

Kevin Anderson has been an important member in the Maryland soccer scene for over two decades. Kevin played in affiliated USASA leagues while studying in Montana and Alabama, so upon taking over the Mason-Dixon Soccer League, he immediately affiliated the league with the Maryland State Soccer Association. The league has a long history with teams that have come from not only the Frederick area but also from bordering Pennsylvania and West Virginia. While no longer a player in the league, Kevin has continued to keep the league running with 8 to 12 teams from season to season.

Kevin continued his path in soccer administration upon election as the Treasurer of the Maryland State Soccer Association, a position in which he has served since 1996. Along with his responsibilities as treasurer, Kevin has represented the state at regional and national meetings of USASA and USSF. Kevin has served on several USASA committees including Appeals, Best Practices, Governance and Membership. Kevin was an active participant in the 2009 USASA Strategic Planning Summit and served as the Best Practices Implementation Team Leader from 2009-2011. Kevin has played and coached at several levels, which he continues to this day. He also became a USSF certified referee in 1989 and currently holds a State Emeritus Badge.

Larry Hall has been a staple in North Texas Soccer since his first year as an adult player in 1975. He officiated from 1975-85 and then again from 2001 to the present day. He's been involved as a North Texas Premier Soccer Association Board Member since 1977, was its division commissioner from 1977-81, and served as secretary from 1982-1990 and president from 1990-present. Hall was the NTSSA Men's Commissioner from 1994-2000 and from 2010 to the present and serves as Co-Chairman of the state's Rules Committee.

Similar to the state level, Hall's been active at the national level as well. He's been on the budget committee, the rules committee, both of which he also chaired, and also the national cups committee. During the late 1990s, Larry served as Region III Director and a member of the USASA National Board of Directors for several years.

He is a member of the National Soccer Hall of Fame (2008) and Cal South Hall of Fame (2015). It is estimated that he has refereed over 8,000 amateur adult major division games throughout his career. He's been awarded the John O. Best Award as well as the Eddie Pearson Award. Off the field, Toros is the author of three books -- Quest for the Cup, Defining Moments in a Referee's Life and In Search Of a God.

Dan was born in Indianapolis in 1956 and is number 7 of 10 siblings. His family moved to Germantown, Wisconsin where he grew up playing baseball and American football. At the age of 13 his family moved to Phoenix, Arizona where he currently resides. Dan did not get involved in soccer until his fiancée (now his wife Barb) came home one day and said "By the way, I signed you up to be a soccer referee." At that time, Dan knew virtually nothing about soccer except that the ball was round, you kicked it with your foot, and you could not use your hands. After Dan complained a little, Barb said "Do not worry, there is a class and they will teach you how to referee." Little did either of them know that what started back in 1982 is still going strong today!

After 3 or 4 years of refereeing, Dan decided to try his hand out at playing soccer. As fate would have it, Dan's first run down the field resulted in him slipping and as he went down using his arm to stop the fall. As he got up, he knew his wrist hurt but he continued for the rest of the practice. A chipped bone in his wrist resulted in a cast for the next 6 weeks. Undaunted by his start as a player, Dan continued to play for the next 12 years until arthritic knees forced him to not only stop playing but to stop refereeing.

Fortunately, while Dan was playing and refereeing, he also became involved in the management side of soccer. Dan also found that he liked being one of the people that got things done behind the scenes. In 1990, a group of people including his wife Barb assumed management of the Arizona State Soccer Association. During the next 14 years, they grew the ASSA from 1 league with 300+ players to 8 leagues with over 5,000 players.

Later, when a new men's league was forming, the National Premier Soccer League (NPSL), they asked Dan to become the commissioner of the league, and although he was apprehensive about the position, he decided to undertake that role. The league started with 13 teams and 8 years later when Dan decided it was time to try other things the league had 60 teams and was one of the top men's leagues in the nation.

Dan served as Region IV Director during the early 2010's, and was on its rules committee for nearly a decade, five years as its Chairman.