The 17th edition of the USASA National Veterans Cup was held July 8-July 13, 2014 at Hampton Soccer Road Complex, in Virginia Beach. Over 2,200 players on 97 teams registered to compete for titles in 14 different divisions.  This year we added a new division - the men’s over 70.  We also saw the return of the men’s over 45 division with six teams. As in past years we had international teams attend, and this year they came from Canada, Japan and Australia.

This year was very different from any of the previous tournaments.  We encountered the following on Thursday July 10: “Tornado.  Downburst. Microburst. Flooding. Cleanup. Game on!”  We had three storms converge in Virginia Beach which made playing any type of soccer very difficult.

Despite these difficulties the committee, the local state association, and USASA went to quick action and were able to get every game played. We had to adjust game time lengths and extend the playing hours. However, despite these challenges, everyone was positive and worked together to make the best of the situation. The players, the referees and volunteers made sure that no storm would ruin our week!  To make up for lost time we had games start as early as 7:00 am and played as late as 11:30 pm. Talk about commitment to soccer by everyone involved!

All games started as planned on Wednesday morning. We had a perfect day and things were going very smooth until we got the first big storm around 4:00 pm. This was the first indication that we were in for a long week. Even with all these obstacles every game was completed and by the time playoffs started we were back on track from a schedule standpoint.

For the finals we had 14 games played for a title in each division. In the newly created men’s over 70, FC Georgia United beat NEOTHSL by a score of 1-0.

Mass Spirit Seasoned beat North Texas Flippin on penalty kicks to take their first title as a newcomer in the women’s over 40 division. The men’s over 40 saw Lumark Annadele O40 beat Texas Cosmos with a final score of 3-1.

The women's over 60 title went to returning champion, Motor City Classic. They defeated Mor Soccer by a score of 3-0.  In the women’s over 65 division, Dallas Kicks took home the title with a victory over Virginia Spirit. The Men’s over 65 division featured O65 NC United avenge last year’s semi-final exit by beating Golden State Legends O65.  The final score was 2-0.

In the over 50 men's division Radnor United beat Newly United.  This was a highly contested game with a final score of 4-4 before it had to be settled by penalties. In the women's over 50 division, the reigning champion Austin Allies lost against Virginia OMB by a score of 3-2.

In the over-30 men’s division, we saw Islanders beat the International. This was a very close game and it could have gone either way as both teams gave it their all on the field.  The final score was 3-2.  This is the second title for the Islanders in four years.

And finally, in the women's over 30 division, Mass Spirit beat Houston Challengers O-30 to avenge a last minute OT final loss two years ago in San Diego. The win ensured the state of Massachusetts its third division title of the day.  North Carolina was also able to win three division titles at this year’s tournament.

Many thanks to Jessica, Chris, Toni, and Mary Beth from the Metropolitan DC-Virginia Soccer Association, the City of Virginia Beach, Gina and her staff from Hampton Soccer Road Complex and all of the volunteers from the hosting committee for making the 2014 Veterans Cup a success despite the weather. We also wanted to give a special thanks to the Sportsplex and Field House for providing their facilities to us on a short notice.

This year we had a total of 85 referees from 27 different state associations attend.  A special thanks to all of the referees who donated their time to officiate matches.  And a very special thanks to the members of the national committee who worked overtime in helping out teams, players, referees and ensuring that everyone were taken care of during the tournament.

The 2014 Veterans Cup is slated to be back in Virginia Beach next year. The dates for the tournament will be July 14-19, 2015.  Remember next year we are planning a big soccer festival with all USASA National Championships played at the same venue and timeframe. We are also starting to look at locations for 2016/17. If your state is interested in hosting those years please have them reach out to us.

In the coming days, we will be posting tournament pictures on the USASA website and don’t forget to follow us at Instagram (username: veteranscup hashtag: #usasaveteranscup).  Also in a few weeks, we will be sending out a survey to all players.  We encourage everyone to participate in this. We are constantly looking how we can improve this event and this feedback is important to us. We are very excited for next year and can’t wait to see you all. The planning has already started and be on the lookout for registration and lodging information in early fall.

The Veterans Cup was founded by the United States Adult Soccer Association in 1998 to provide the highest level of competition for players that are 30 years old and above. Throughout the years the tournament has been held in various locations including Bellingham, Washington; Nashua, New Hampshire; Beckley, West Virginia; Honolulu, Hawaii; Wilmington, North Carolina, and Escondido, California. The previous 2 years we had 197 teams attend and this year we had a total of 97 teams participate. 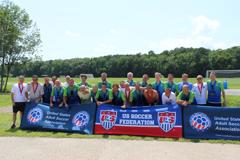