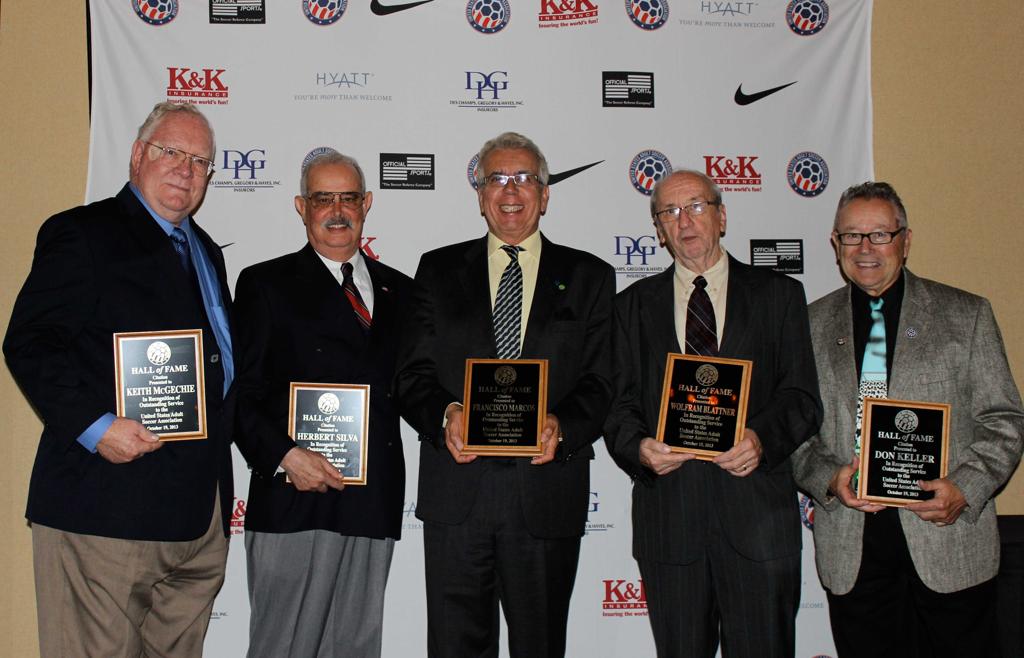 The Hall of Fame Committee and USASA are happy to announce the latest class of the United States Adult Soccer Hall of Fame. The class of 2013 includes irreplaceable members of US Adult Soccer, and we’re proud they’ll always be a part of our organization.

The USASA Hall of Fame was established in 2006, to honor those individuals who have significantly contributed to the growth of adult amateur soccer in the United States. The selected individuals will be inducted into the Hall at the USASA’s annual Midyear Meeting, to take place this year in Lake Tahoe on October 18-20.

A referee since 1972, Wolfram succeeded in attaining the level of national referee before going emeritus. As a former senior linesman in the North American Soccer League, he took his experience and became an instructor and assessor. He reached the level of national assessor and was assigned as a stadium observer in Major League Soccer as an MLS assessor. North Texas Soccer was fortunate to have Wolfram at its service. He served as North Texas Soccer State Director of Instruction on the Referee Committee and as the Chairman of the Referee Committee from 1982-1986. He also served as the USASA National Referee Chairman from the mid to late 1990s.

From youth to adult, Don has contributed and succeeded in every level of soccer in Iowa. He began in 1980 has a jack-of-all-trades for the Johnston Soccer Club and since has been involved in Iowa soccer as a coach, player, referee and administrator. He served as the president for Iowa soccer from 1991 to 1999 and then as vice president until 2005. At the national level, Don’s been the Region II chair of the Veterans Cup for over a decade and was the regional chair for the USASA Membership Committee from 1995 to 2002.

The founder, president and commissioner of United Soccer Leagues, Francisco started the largest system of elite level soccer leagues in North America. His roots reach back to the Empire Soccer League in New York, which he founded, as well as the American International Sports Exchange, the first American company to develop soccer tours for teams in the United States. Recognized by his peers as one of the key executives in the game, he served on the board of directors for US Soccer, the US Soccer Foundation, the National Soccer Coaches Association of America and the US Soccer governing task force.

Keith gained an appreciation for soccer in the 1950s watching games at the Denver Polo Grounds with his father. He’d go on to play club soccer at Colorado State University and on Army teams while serving. He rose to the top of the Colorado State Soccer Association as its president from 1976 to 1988 and played various roles in region IV such as the cup commissioner and rules committee member. He was also the original chairman of the USSF Amateur Division ofAppeals and Rules Committee.

Currently the Missouri Soccer Association Vice President, Herb is best known throughout USASA and USSF as a referee. He was a North American Soccer League official and MISL/MSL full time referee throughout the 1980s. As the 1990s rolled around he became the director of officials for the MISL/MSL and also went on to officiate in the CISL. He’s also a National Referee Committee member as well as an instructor and assessor.  Silva is currently US Soccer Director of Referee Identification & Training.