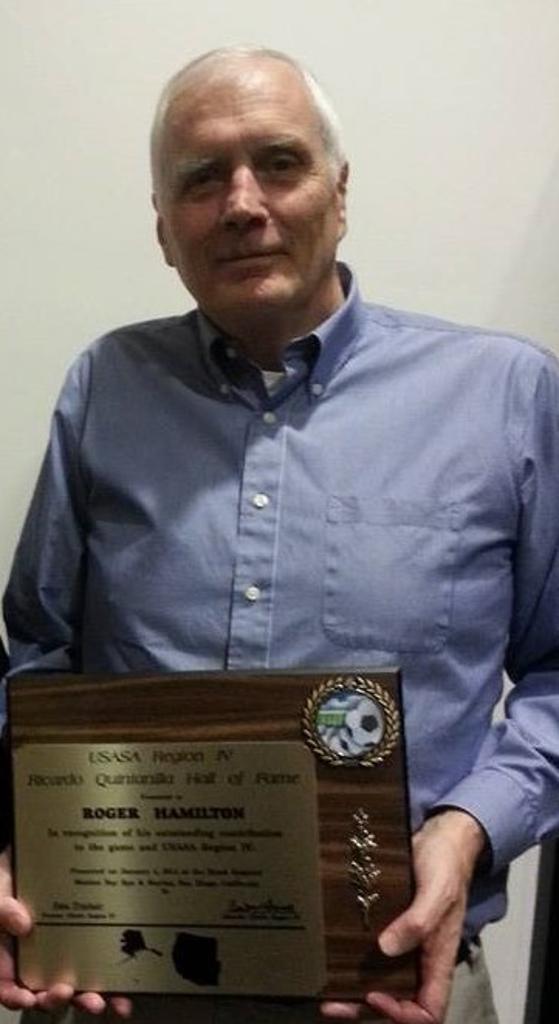 Roger Hamilton was born in Washington, DC, on April 27, 1943. Growing up an Army brat, he was no stranger to moving place to place, even going as far as briefly living in Germany shortly after WWII. Ultimately, he returned to the DC area then later graduated high school as co-valedictorian in nearby Falls Church, VA.  Keeping with his rootless ways, he then chose to attend a prestigious institution across the country in California. At Stanford University, Roger earned a bachelor’s degree in Statistics and received a Computer and Law Fellowship.  Following his degree, Roger briefly wore many hats as a computer programmer and a political campaign manager, before switching gears and enrolling in the University of Oregon’s School of Law to launch his career practicing corporate law.  Here, Roger showcased his earlier work as the editor-in-chief for the University of Oregon Law Review.

Despite the fact that Roger discovered his passion for soccer a little later in life than most, at the age of 36, he has unquestionably proved an important asset to the sport.  In addition to his continuous involvement as a player for 42 years, Roger has also served the likes of local teams as a coach and mentor, a manager of the same indoor team spanning over two decades, local leagues as a referee, the Region IV as Chair of the Appeals Committee, USASA as a member of the Divisional Leagues Committee, the Grants Committee, and the Recreational Player Committee, as well as USSF as a member of their Appeals Committee.  This is in addition to the amazing work that he has done for our state with the Oregon Adult Soccer Association (OASA) and the Oregon Referee Committee (ORC).

Roger has been an officer of OASA since 1988, and for over 32 of those years he has been our President.  At the onset of his tenure, the association was small with only a handful of leagues and 1000 or so registered players, completely volunteer-run, and far from optimally efficient.  Compounding this struggle, local leagues were also battling a severe referee shortage as OASA had limited-to-no reach beyond the Portland-metro area.

In the course of his first few years, Roger became instrumental in the conception and creation of the Oregon Referee Committee, which stills operates as an independent entity dedicated to the recruitment and training of U.S. Soccer referees. While simultaneously fundamental in establishing the first paid management position for the OASA office, Roger alleviated the burden of daily administrative tasks from volunteers, and provided a much-needed systematic update to OASA office procedures and equipment; improvements which allowed the reallocation of time and resources for the pursuit of larger organizational goals in our region and on the national level.

Under Roger’s leadership, OASA has transformed into the professional organization it is today with a fully motivated staff of four and an Executive Director, upwards of 20 affiliated leagues reaching a wide variety of divisions hosting approximately 7000-8000 or more registered players and counting!  Notably, Roger was a constant advocate for adult soccer (no matter if he was at the bank or barnyard, you would have heard him say to anyone he met, “Do you play soccer?” and if they weren’t currently playing, he’d proceed to tell them why they should and how to go about doing it).

Roger was also instrumental in bringing the larger soccer community together through his involvement in the Miller Cup (aka the Oregon Soccer Classic), which existed for more than 40 years, and by introducing events such as the 1997 National Cup Finals, the 1999 US Soccer Festival, and several Region IV meetings and occasions.  While Roger did not garner these accomplishments singlehandedly, it is without doubt, we would not be nearly anywhere we are today without him.

Roger has since had three adult children and four grandchildren; when asked, he’ll tell you that his most cherished achievement on the soccer field has been playing on indoor teams with his kids.

Please join us in honoring Roger for his over three decades of exceptional service to the game of soccer.  Without such passionate and dedicated advocates, it certainly wouldn’t be the beautiful game that it is in the US today.