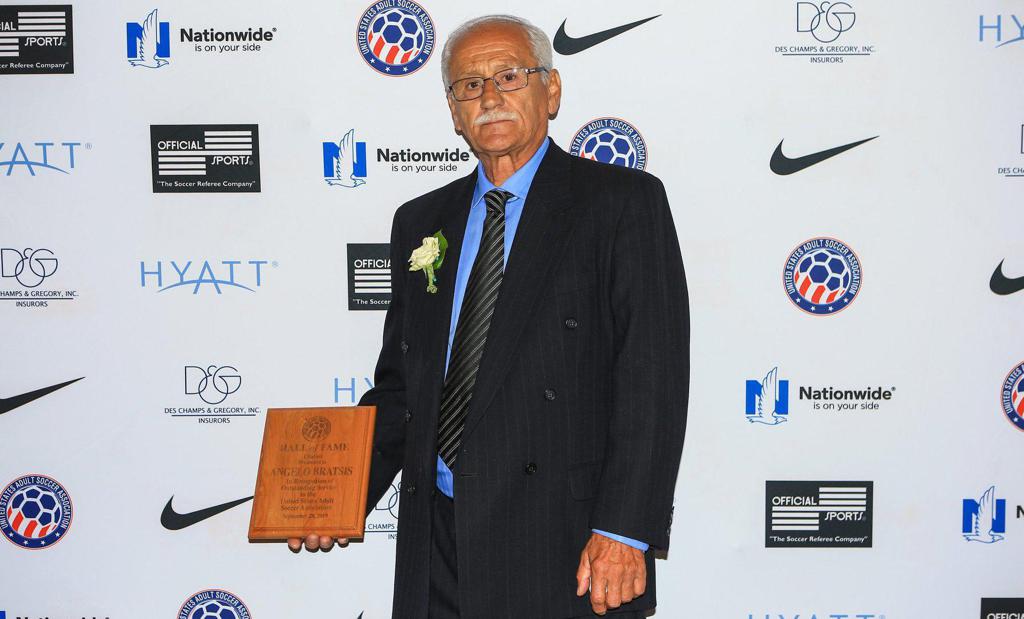 During the great upheaval following WWII when the borders were closed by the communists and many Greek villages were closed behind the iron curtain, his mother escaped with her three young sons, Markos, Angelo, and George, where she reunited with her husband on the Greek side of the border. They immigrated to the United States in 1957.

Angelo fell in love with the game of soccer as a young child in Greece, and then in the United States he continued his passion first as a player and then as a soccer referee. Angelo was a refereeing legend in the United States, and his list of on-field accomplishments knows no equal. He was a member of the FIFA Panel of International Referees for 12 years beginning in 1980 and represented the United States in 13 countries on four continents. Along the way he refereed more than 130 international matches, including 25 class A matches.

He has refereed in no fewer than five professional leagues. Beyond refereeing excellence, Angelo has been instrumental in building the instructional program for US Soccer. He has been on the National Assessor staff for over 30 years, and the National Instructional staff for more than 40. It has been in this capacity of Coach and Mentor that Angelo has had an immeasurable effect on Adult soccer in this country. He has been appointed Supervisor/Assessor/ Instructor to countless Regional and National Adult tournaments across the country, guiding referees as they seek their own level of excellence. Virtually all referees that pass through the Amateur ranks on their way up the ladder are familiar with and grateful for the instruction he has provided.

Additionally as Chairman of the USASA Referee Committee. He set the highest standards and was unwavering in his support of the adult game. "Service before Self" was his motto and that is how he lived. He leaves behind his beloved wife, Haido Divris Bratsis, his daugher, Angel Bratsis Landy, her husband Michael, grandchildren, Andrea, Nicole, and Michael, Jr., his daughter, Katherine Bratsis Seremetis, her husband Chris, grandchildren, Demetri and Christina, his son, Niko Bratsis, his wife Loukia, grandchildren, Haido, Evangelos, and Alexandros. Angelo's brothers, the late Markos, George, John, and a sister, Elpiniki, and many nieces and nephews.

Funeral Services will be held on Tuesday, May 4th at St. Nectarios Greek Orthodox Church, 39 Belgrade Avenue, Roslindale, MA, at 11AM. Visitation from 10:30AM to 11AM. Burial at the Gardens Cemetery, 670 Baker Street, Boston, MA.