The Hall of Fame Committee and USASA are happy to announce the latest class of the United States Adult Soccer Hall of Fame. We're proud to welcome each of the new members and excited to see them inducted this fall.

The USASA Hall of Fame was established in 2006, to honor those individuals who have significantly contributed to the growth of adult amateur soccer in the United States. The selected individuals were inducted into the Hall on September 28rd at USASA’s AGM in Palm Springs, CA.

Read their bios below. 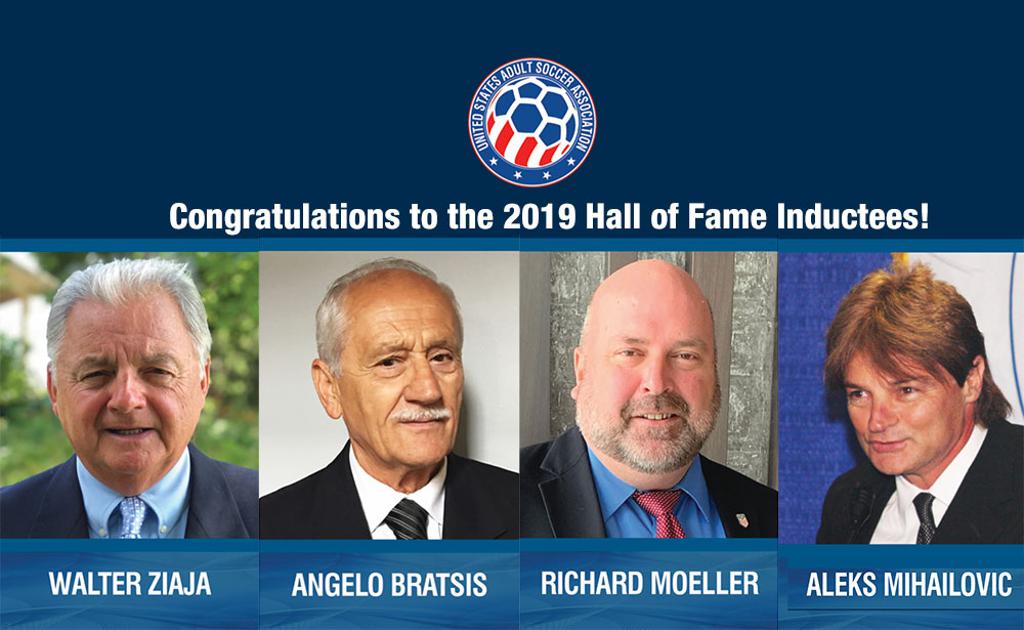 Angelo Bratsis is a refereeing legend in the United States, and his list of on-field accomplishments knows no equal.  He was a member of the FIFA Panel of International Referees for 12 years beginning in 1980 and represented the United States in 13 countries on four continents.  Along the way he refereed more than 130 international matches, including 25 class A matches.  He has refereed in no fewer than five professional leagues.

It has been in this capacity of Coach and Mentor that Angelo has had an immeasurable effect on Adult soccer in this country.  He has been appointed Supervisor/Assessor/ Instructor to countless Regional and National Adult tournaments across the country, guiding referees as they seek their own level of excellence.  Literally every referee that passes through the Amateur ranks on their way up the ladder is familiar with and grateful for the instruction he has provided.

In his current role, Angelo Chairs the USASA Referee Committee.  He continues to set standards and is unwavering in his support of the adult game.

Richard was born and raised in Philadelphia, PA until he was 15 years old and then moved with his family to Puerto Rico where he attended & graduated from high school in 1984. He then went to the Philadelphia College of Textiles & Science in Philadelphia for his 1st year of college. Subsequently, he moved in 1985 to Milwaukee, WI where his family had moved to from Puerto Rico, and he stayed there to attend the University of Wisconsin-Milwaukee where he graduated in 1988 with a Finance Major and Spanish Minor.

In 1989 he moved to Tampa, Florida where he lived for 16 years and then moved in 2006 to Miami Beach, Florida where he currently resides. While he lived in PA, WI, and FL he has played on soccer teams (and with soccer clubs) affiliated with USASA and/or USSF (FC Bayern in Philadelphia; Bavarians SC in Milwaukee; and Kickers FC in Tampa).

Richard played, coached and managed various Men's and Coed teams that have participated in USASA/FSSA affiliated leagues and tournaments between 1990 and now. He obtained his USSF "E" Coaching License in Tampa, FL in 1997 and his USSF / USASA Adult Coaching License in Fort Lauderdale, FL, in 2013.

Aleks Mihailovic is one of this nation’s most highly respected coaches and an individual who has given so much to this game including the members of the USASA which he has loved for many years.  His accomplishments are numerous as described in a long list. Many of his achievements and results warrant his induction into our Hall of Fame.

He acquired his knowledge and experience through education and having played from the youth level to becoming a professional player in the NASL (70s-80s). His love of sharing his knowledge with as many people as possible is incredible and it is a pure delight to see how much those people gained from spending their time with Aleks. The education he has given to coaches and players over the years includes not only soccer skills but also how to present yourself as a person off the field. He’s given timeless contributions to the local community, Illinois State Soccer Association, USASA Region II and USASA. It will be a great day for his family and friends who all will be very excited and proud for Aleks to be the next member of the USASA Hall of Fame.

Those of us who are amateur soccer “lifers” nominated Wally Ziaja to the USASA Hall of Fame to recognize both Wally’s contribution and, through Wally, to recognize his many counterparts through our game for personifying our motto:  Soccer: Your Game for Life.  Through his life Wally has played the game at the highest level on the Olympic and Pan American teams for the United States, been a constant presence as a player in the amateur leagues in Wisconsin, had a taste of professional soccer in the NASL, and been a permanent fixture on the sideline in high school and adult amateur soccer to make sure that teams have the support to create and sustain soccer teams beyond their time in youth soccer.  In addition, Wally has prowled the field for the last 15 years as a soccer referee as well.

People like Wally Ziaja are what sustained soccer over the last 50 years when everyone was an amateur. There are lots of Wallys in our game and we nominated Wally for this honor both for what he has earned as well as to honor his colleagues who put in the time with him.